Before I start, this is not a paid post or advertisement. I just like talking about budgeting and this is my opinion of some services I have used.

Back in April, I talked about trying a new budgeting app (A New Budget App).  Since then, the trial ended and I moved to another budgeting app.  That makes three different resources I’ve used this year.  Now after having tried them all and having made a decision, I want to give my review of each.

I used a combination of Mint and an excel spreadsheet for about four years. The pros of Mint is that it’s free and that it automatically imports your transactions after providing your bank account information. If you give it other asset data like the value of your car or link your house through Zillow, it will show you your net worth.  It also has tons of charts and graphs so you can analyze your spending and net worth. 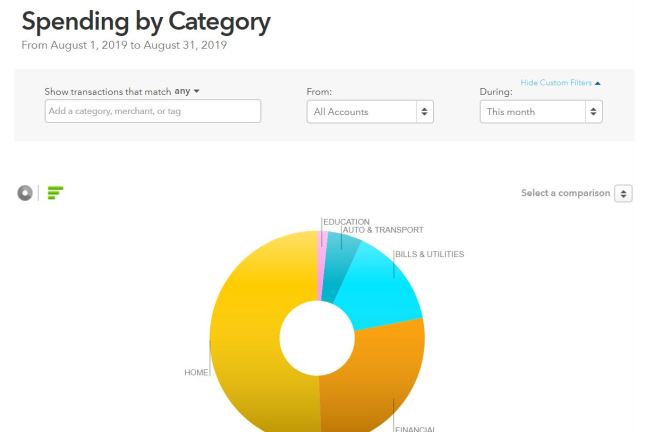 Above is an example of one of the graphs. They have fun colors and are easy to read. The cons of Mint is that it’s free. I know, I know. I listed that as a pro. But it’s also a con because the way that Mint makes money is by using ads. And sometimes they are REALLY in your face. Below is an example of an ad shown literally as you are signing in.

It’s huge and it’s advertising a credit card. Mint LOVES to advertise different credit cards and places to refinance your student loans. Again, that’s how they make their money. If you have a problem with using credit cards (and not paying them back), Mint is probably not the best resource for you.  The other problem with the ads on the website is that they sometimes get in the way of what you are trying to view. It’s not as much of a problem on the app, but the app doesn’t have as much stuff as the website does. I also stopped liking Mint because I realized it’s really more of a tracker app than it is for budgeting.  You can put in your income and spending categories, but then you just sit back and let the spending fly. I found that I was overspending in some categories and under spending in others. Then I would try to manually calculate if I was over or under for the month.  I got tired of being over all the time… and doing that much math.

So I decided to try You Need a Budget or YNAB.  I talked a little bit about YNAB back in April. The pros of YNAB are that it makes you cover overspending by moving money from one category to cover another category and they also have some great tutorials.  The people at YNAB want you to succeed with money so they have a lot of great teaching resources on their Youtube channel. 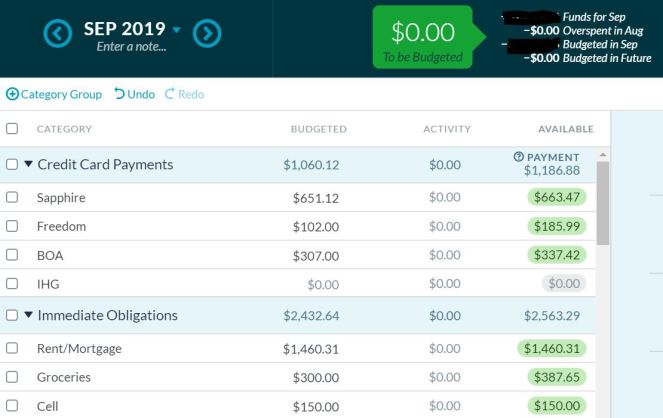 However, one of the things I didn’t like about YNAB is that it doesn’t let you budget future months. YNAB wants you to budget with only the money you have here and now. So for me, it’s hard to use it to plan for future expenses.  Another thing I didn’t like about it when I used it a few months ago is that any amount you don’t spend rolls over into next month. Meaning if you budget $400 in groceries and only spend $380, then your next month starts with $20 before you’ve done any kind of budgeting.  I don’t want my money to ‘roll over’. If I have any extra money at the end of the month, I want it to go to savings or debt. I decided to message customer service about the roll over issue and that brings me to another pro. Customer service responded quickly and had a workable solution to the problem.  Unfortunately, I waited until the end of my 60 day trial to ask anything about it and I wasn’t sure that I liked the app to get over what is to me, it’s biggest con: YNAB costs $84 annually and it’s billed all at one time instead of $7 a month.  After using a free app for so long, it was hard for me to swallow that pill.

You can see from this picture that Every Dollar says I’m only 37 cents over budget for the month but I’m $10 over budget just in pet supplies. Well Every Dollar doesn’t aggregate the rest of my spending to show that I’m over budget by $10 AND 37 cents. It acts like money has already been moved from a different category. Which is fine if I don’t plan on spending any of that money, but that’s not always the case. And that’s how I found myself over budget every month that I used Every Dollar.  I can’t vouch for the paid version because I didn’t try it. The paid version is $99 per year.

Out of these three apps, I liked the features that YNAB offers the most. And since I am tired of spending too much money, I decided to bite the bullet and go back to YNAB.  So I paid the $84. Per their website, you can quit at any time, for any reason, and get the remainder of your money back if you don’t like it. September will be my first month back using the app. I will keep you posted on if I still like it after a couple of months of using it and if it helps me quit going over budget monthly!

My husband and I live in Dallas, Texas where we have two dogs and two cats. I started this blog to tell about my journey to becoming debt free and maybe help friends and family along the way. View all posts by Charli M.